This edition of Stone-Cold Nuts is sponsored by…

Unlock the savory aroma deep within you. Release your inner hobo… with Blackjack by Pigalle.

Blackjack combines the scents of cheap bourbon and cigarette smoke with ripe overtones of old socks and flop sweat.

It’s delicious, too! Buy it in the one-liter size and try it over ice.

You’re a man. And sometimes a man needs to smell. Really smell. And nothing else smells like Blackjack pour Hommes.

One of the cleverest marketing tools employed by casinos is the “player’s card.” Boiled down to its basics: You spend a lot of time at the casino and in turn they toss you a bone in the form of a free or discounted meal or hotel room.

The casinos assume, of course, that the more time you spend on the casino floor, the more money you’ll lose. Everyone who’s a member of one of these “clubs” understands this, and understands that each of the so-called rewards extended to you is really just a ploy to lure you back so you’ll lose some more money. This doesn’t stop you from illogically feeling that you’re special or that you’re getting something that’s truly free.

Thus, I was idiotically pleased when I received an offer from the Eldorado in the summer of 2004 for a $19-per-night room. They liked me! They really liked me! Also the timing was perfect: Marital woes were taking a toll and I needed to get out of town in a big way. This would be a way for me to take some time for mental hygiene and to put my card-counting skills to the test.

So it was that on my first night in Reno, I found myself downstairs at the Eldorado casino sharing a blackjack table with five other players. Everyone was laughing, joking, having a swell time: They were winning. The star of the table was a serviceman on furlough from Iraq. “Affable” doesn’t begin to describe him. “Roaring drunk” is closer.

In spite of his inebriated state (or perhaps because of it), he was killing the house. An abysmal player, he was making one boneheaded decision after another (hitting his 12 versus the dealer’s up-card of 6, for example) but he simply could not lose. Everyone loved it. Cheering! High fives! Who didn’t like to see a member of our armed forces win? Hell, he deserved it, no matter that he was among the most clueless blackjack players on Planet Earth.

But I appreciated this guy in uniform for another, totally selfish reason: He was providing me with cover. All attention was on him and his growing pile of chips. Perfect!

Since the spotlight was on G.I. Joe, it seemed obvious that I’d be able to count cards and vary my bets however I wished without attracting attention. The casino be damned! I could do whatever I pleased. In Greek tragedy this kind of attitude is known as hubris; the hero displeases the gods which leads to his downfall. The gods in this case were the security cameras positioned in the ceiling above the gaming tables. And I displeased them because they caught my stupid blunder.

To understand this blunder, you’ll need a little background on card counting. (Pardon me while I get a bit technical for a couple of paragraphs.)

It’s good to be high

Card counting is based on a simple precept: When the deck contains a high proportion of aces and cards valued at 10, the odds shift away from the casino and towards you. So when the count is high, you raise your bet. The higher the count gets, the more you “spread” your bet. 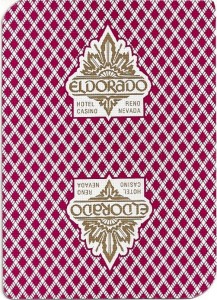 Conversely, when the count is low—meaning that there are a lot of low-value cards still to be dealt—you lower your bet. There are a bunch of fine points and nuances that I’ll skip, but here’s something out of Card Counting 101: When there’s a “push”—a tie between the dealer and the player—you never ever alter your bet; you simply let it ride. Altering your bet in this situation signals that you know that the “count” has changed; it’s akin to wearing a dunce cap with the words “I AM A CARD COUNTER” emblazoned across the front.

I was about to put on the cap.

In front of me were six red chips—thirty dollars. The table was littered with a bunch of face cards and aces, bringing the count into negative territory. I was holding two face cards and the dealer had two face cards: a push, so my chips remained in front of me. The G.I. had pulled down a blackjack and was busy giving his neighbors a high-five, making a big commotion, giving me the bright idea that I could pull back three of my chips, a move that I just knew would go unnoticed.

Ten minutes later, I was bored. Despite all the help I was getting from the U.S. armed forces, I was up a mere $34. Time to seek my fortune elsewhere. I scooped up my chips and turned to leave the table.

It was a bland-faced guy in a beige suit, open collar.

Him: “We’d prefer it if you not play blackjack at our casino.”

I didn’t quite believe what I was hearing. “Excuse me?”

He said, “Feel free to enjoy any of our other games,” and made a gesture that in the movies says One day, son, all this will be yours.

The word “nonplussed” was coined for this exact kind of situation.

Him: “We don’t like your style of play.” Now looking out across the casino, he spread his arms grandly, Moses parting the Red Sea. “But you are certainly free to enjoy any of our other fine games.”

Me: “Come on. Are you kidding? I’m only up thirty-four bucks.”

He shrugged. “Doesn’t matter. We don’t appreciate your style of play.”

I wanted to say, What about that drunk soldier? What about HIS style of play? Do you see how much he’s got? Do something about him, why don’t you? But that would’ve been a betrayal. After all, I’d used him for cover and I’d blown it.

This brief episode was conducted so quietly, so politely that it attracted no attention whatsoever.

I wandered into the banks of slot machines. My mouth hung open. I was in shock (nonplussed, I tell you! nonplussed!) at this absurdity.

Let’s get this straight: They invited me to this hotel, more or less comp my room, and then—in effect—toss me out of their casino?

Then a worse thought occurred to me. As a professional courtesy, casinos were known to fax photos of card counters to other area casinos. And that would put me out of action for the remainder of my trip.

I had to find out. 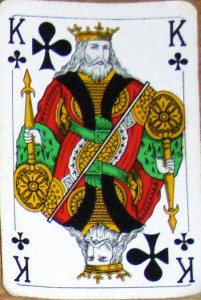 Ten minutes later I’d crossed the Truckee River—where it’s reputed that the newly divorced would toss their wedding rings—and was playing blackjack at the Siena. I did not slouch or turn away from the security cameras. I wanted to know where I stood; I wanted them to get a good look at me. An hour later it was apparent that I had not made it onto the Most Wanted List. It was also apparent that card counting does not constitute the road to riches.

I skulked back to my hotel room $200 poorer.

So what did we learn today? Well, that card counting is not a foolproof recipe for success. And that military personnel may be useful in providing cover on the battlefield, but at the blackjack table? Not so much.