Evil George Taylor doesn’t intend to be evil. In fact, he’s a kind-hearted man, a charming conversationalist, a very talented writer and a smart, gentle spirit. He’s a cultured guy, too. He attends the theatre, the opera, the symphony, and he’s always going to those places where you look at paintings by dead people… what do they call those joints? The word escapes me… Yeah, that’s right: museums! He hangs out at museums.

When all’s said and done, he’s probably the most cultured individual I know. He just happens to be in league with Mephistopheles. How do I know this? We go gambling together once a week, that’s how I know. Case closed.

As any demonic entity will tell you, timing is all-important, and Evil George Taylor (EGT) began spinning his evil web around my innocent psyche in March of 2000. By then, fishing had lost its allure (hey, that’s almost a pun!). Most of it had to do with the commitment of time that fly fishing demanded. On Wednesdays, brother-in-law Alan would close his podiatry office and head for the Deschutes in his red BMW; I had an open invitation. Though I was (and am) self-employed, most weeks I simply could not justify clocking out for an entire day. Copy had to be written! Plays had to be penned!

Then there was the drive: two and a half hours over Mount Hood to the sleepy little burg of Maupin, Oregon. Once we landed in Maupin in the general vicinity of a hot fishing spot (secret to the world, revealed only to us by one or another of Alan’s patients), it was time to assemble our gear, squeeze into our rubber chest waders, then take the long walk in the sweltering heat to the bend in the river where our quarry awaited our arrival, hungry schools of alleged fish just waiting to be fooled by us. By the time we got to at the designated spot—IF we could find the designated spot—my overheated, rubber-clad lower body was drenched in sweat. Very moist. And hot. You could steam a head of broccoli down there. Suddenly it actually seemed like a grand idea to risk your life by stepping off the bank and into the treacherous current just to cool off.

Fishing (as well as gambling) requires selective amnesia. As an example, here are the things you might choose to forget until you step foot into the Deschutes:

That particular afternoon, I was in the stream, mid-tummy deep, a dozen yards from the shore, and about the same distance from Alan, who stood parallel to me casting his line. To my left, I could see several tantalizing little rings on the river’s surface, spots where a couple of fish were snacking on some hapless insect forms. I cast my line toward the rings but…couldn’t…quite…reach…the spot. Keeping my eyes on the prize, I took a small, slow-mo step to my left, threw out another cast.

Another teeny step to my left, and the riverbed disappears. In a second, I’m up to my neck in the Deschutes and the water rushes over the lip of my loose rubber waders, straight to my feet. This, I think, is what they mean by cement shoes. I’m sinking. I see my plastic box of flies float way. I’m frantically paddling, and in one of the most inane decisions I’ve ever made, I HANG ON TO MY ROD! I grip the damn thing like it’s a floatation device. After all, I’ve lost about fifty bucks worth of feathers and hooks, why waste another two hundred dollars worth of equipment?

I’m paddling with one arm, and Alan comes rushing towards me (which in effect is at a caterpillar’s pace when you’re chest-deep in a strong current) yelling “Let go of the rod! Let go of the rod!” He’s extending his rod, which I lunge toward and miss. He comes a step closer, and I’m able to grab the tip of the rod (hey, there’s the Fenwick logo!), gain footing, then take a soggy walk of shame back to the shore.

Alan, who’s not typically given to morbidity, says, “I flashed on bringing your corpse home to Jane. What would I say? ‘Here’s your dead husband’?” Pause, then: “And he hangs onto the rod? What the hell was going through your mind?” 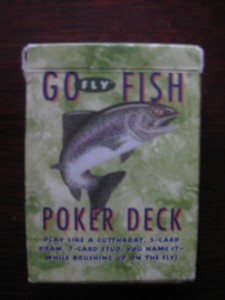 So, by the spring of the year 2000, I was ready step out of the stream more or less permanently. That was the year that my (now ex-) wife had talked me into taking the kids to Las Vegas, during Vegas’s brief flirtation at remaking the city into a kid-friendly destination. Part of that makeover were shows like Cirque Du Soleil’s “O,” which my wife – a theatre director – was foaming at the mouth to see. She applied pressure to the point where soon the idea of travelling a thousand miles to see a water circus in the middle of the desert held enormous appeal to me. I’d just have to accept seedy, gaudy Las Vegas as the scummy coating around this precious aquatic jewel.

To be clear: I still hated the idea of Vegas and was intimidated by the notion of gambling. Losing, in my mind, was a foregone conclusion.

Blackjack, he said. Basic strategy, he said. You can win, he said.

Basic strategy? I liked the sound of that. According to EGT, using basic strategy tilted the odds in your direction. It was all a simple matter of memorizing a chart of numbers.

Off to Vegas I went. Before too long I made that decision to trade one hobby for another. With fly fishing, I reasoned, money flowed in one direction: downstream. With blackjack, there was at least the potential of recouping my investment. And once I started winning, there was no going back.

In the rafters of my garage are five fly rods, Fenwicks, in cylindrical tubes. Three of them are gifts from Bob when he retired from the sport and had no more use for them. There’s also a box out there labeled FISHING, which contains a pair of folded-up neoprene waders (minus the boots, which disintegrated years ago), reels, lines and many cases of flies, wet and dry. All this stuff has remained untouched for years, no doubt prompting an enormous collective sigh of relief from the world’s trout population. Why don’t I just sell the stuff? Maybe because my fondness for Bob, now deceased, makes the act of selling those rods seem crass. Maybe because all that gear represents my Plan B: If I go sour on poker, if I’m the victim of too many bad beats, I can always return to the Deschutes and go back to terrorizing those poor little creatures.