‘Tis the season for pumpkin picking and hot apple cider, for long drives through the color-shifting countryside, and for parking yourself in front of the TV for ESPN’s coverage of the World Series of Poker’s Main Event.

Beginning September 28, the network serves up two weekly hours of WSOP programming through the beginning of November, at which point the final table—a.k.a. the November Nine—reconvenes for a slugfest which grosses each player a minimum of $700,000.

But how to fill those empty WSOP-less hours between Sundays? Well, duh, you could actually play poker. Or if you want to engage in a more edifying activity, you might curl up with “Blood Aces,” Doug J. Swanson’s superb, highly entertaining new biography of WSOP founder Benny Binion.

It’s got the feel of a classic. Meticulously researched and told with verve and a sly sense of 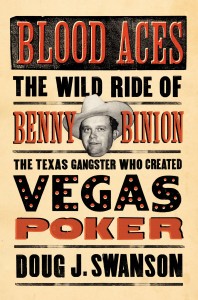 humor, it’s a genre-buster, a gambling saga that will appeal to fans of true crime, to casino denizens, and to anyone interested in a tasty slice of 20th century history.

If you’ve strolled along Fremont Street, Binion is a familiar name thanks to his Horseshoe Casino, a seedy relic from the 1950s. It’s widely known that Binion started the World Series of Poker at the Horseshoe, but I’m guessing that few players know the whole story of the man behind the casino. Swanson remedies that big time, painting a vivid portrait of the nicest man you’d ever want to kill you.

“Binion had long resembled a doughy rural-route cherub,” writes Swanson in the book’s Prologue, “at least until he wanted somebody dead, which happened with some frequency. Then his grin fell away and his darting blue eyes went hard. ‘No one in his right mind,’ the great poker player Doyle Brunson once said, ‘messed with Benny Binion.’”

The book follows Binion’s path from sickly child to horse trader to Dallas gambling kingpin to Vegas hotelier-casino operator. This path was unimpeded by the fact that he was semi-literate (he stalled out in second grade), that his arrest became a top priority of J. Edgar Hoover’s FBI, and that he eventually was brought to justice for the crime of tax evasion and did time at Leavenworth, an event that Swanson chronicles with typical wryness:

‘Prison Doors Clank Shut on Benny Binion,’ said a front-page headline in the Nevada State Journal. ‘Interesting Career Interrupted by Uncle Sam.’ This proved that somewhere in Reno a copy editor had the gift of understatement.

Described by Swanson as “a sort of Will Rogers of mobsters,” Binion was forced to flee from Texas to Nevada after his lucrative gambling operation in Dallas collapsed and the powers that be made it clear that his life was in jeopardy. By the time he arrived in Las Vegas, “The city had entered the public consciousness as a criminal wild game preserve—or, more aptly, an adult amusement park—with an unmatched collection of murderous rogues reborn as legitimate businessmen, free to roam the streets.”

He fit right in and thrived, rising to the status of respected civic leader. Eventually heart ailments slowed him down, but did nothing to squelch his… well, let’s call it spunkiness. To wit:

Although a nurse now accompanied him when he traveled, he still kept a .22 handgun in his pocket… because no one knew when an eighty-year-old man with a nurse at his side might encounter a gunfight.

By the time Binion cashed in his proverbial chips, he’d done a stint as an FBI informant (a tidbit that Swanson reveals for the first time) and had become a pillar of Vegas society thanks to his generous civic donations. Hell, they even erected a statue of the man.

Today the WSOP, which Binion kicked off in 1970 with just a handful of players, attracts thousands of players and is operated by Caesar’s Entertainment, as squeaky clean a gambling enterprise as Binion’s was dirty. In light of this revealing new overview of the WSOP’s genesis, will ESPN acknowledge the tourney’s unsavory roots? I’m betting they will. The story is just too damn compelling.

As Swanson writes, “There is simply no one who went from murderous street thug to domineering crime boss to revered businessman to civic treasure like Benny Binion. No one comes close.”

It’s a one-of-a-kind tale and–along with Positively Fifth Street, Cowboys Full, and The Biggest Game in Town–deserves a place on the shelf reserved for gambling books that, through sheer storytelling verve, transcend the limitations of their genre.

Turns out the Japanese game–which combines elements of pinball and roulette–is making a comeback. Hurray!

What? You didn’t realize that the game had been fading in popularity because of its ties to the yakuza and its lack of appeal to Japan’s young folk? Or that three-quarters of pachinko parlor owners are ethnic Koreans? Or that pachinko’s rebound is considered big news at The New York Times?

Well, get with it! Here’s a link to the recent Times article that will will turn you into a sparkling conversationalist the next time that the subject of pachinko comes up at a party.

Who says lotteries are evil? Enterprising credit unions are actually using the lottery concept as a way to induce low-income families to sock away some dough. And it’s working!

I’m all for it, although I humbly suggest that we should draw the line when your local bank starts rolling out blackjack tables into the lobby.

The failure of persistence

All things apparently, except for the Mohegan Sun casino.

It sounds clever enough. Kolshi used invisible ink to mark the cards in a casino game called Mississippi Stud and special contacts to view the markings.

Only problem was he’d been caught twice before, in Delaware and Louisiana, so the jig was pretty much up by the time he arrived in Connecticut with his bottle of magic ink. Security had his photo and… well, read about it here.

And thanks to my old buddy Don Elustando for bringing this story to my attention.

Last post, I wrote about some of the odd search terms that have led readers to this site. “Human nuts being cold” struck a deep chord with a bunch of SCN fans, none more so than poker pal Matthew Douglas, who emailed me suggesting that I sell cozies to monetize visitors.

As you read this, a small factory in Beijing is ramping up production.

And finally, I delighted and proud to introduce you to “Cigarillo” Sam Pitzkin, a poker player unlike any you’ve encountered. Today marks the day that Sam and I launch PitzkinPoker, a website filled with brilliant techniques that will in all likelihood change the way you look at the game.

So who is Sam Pitzkin?  He’s a man of astoundingly diverse interests: a brilliant poker player who writes haikus, an ex-convict who quotes Shakespeare at the Hold’em table, and a connoisseur of cheese who still finds time to make a positive mark in the community. His charitable organization, the Inner City Children’s Poker Fund, has helped literally dozens of kids escape the clutches of poverty.

Read more about this remarkable man at pitzkinpoker.com.